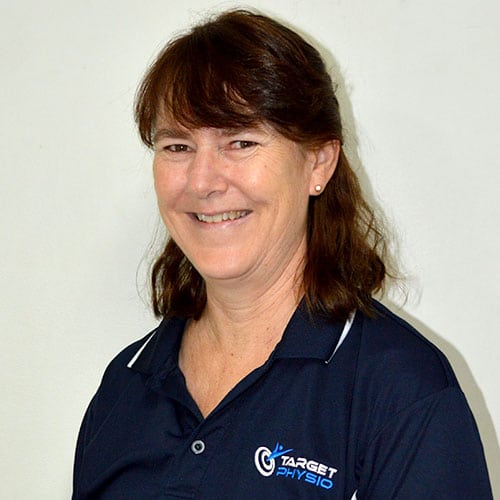 Sally is a titled APA Sports and Exercise Physiotherapist as well as Target Physio’s resident Shoulder Consultant. Early in her career, Sally developed a strong interest in the sporting shoulder, later completing her PhD in 2007 on this subject; investigating muscle activation and pain in athletes, in the athletic shoulder. Her interest in the sporting shoulder allowed her to work with many sporting teams and elite athletes in the fields of baseball, cricket, rugby, basketball, tennis, trampolining and athletics.

Throughout her career, Sally has worked in various aspects of the profession, including, lecturing at the University of Queensland to both undergraduates and post-graduate students, private practice in a city and rural setting as well as in the public system. Earlier in 2019, Sally presented at the Australian Physiotherapy Association’s National Conference on ‘Shoulder Pain and aquatic physiotherapy: comparing land versus water-based management’.

When not treating shoulders, Sally can be found at Snap Fitness Bellbowrie, at a local cafe or at a good movie. A mum of two active, adult daughters, Sally grew up in Toowoomba before settling in Brisbane west with her husband.

Sally treats patients with the following dysfunctions and injuries:

To make an appointment with Sally you can instantly book online below.