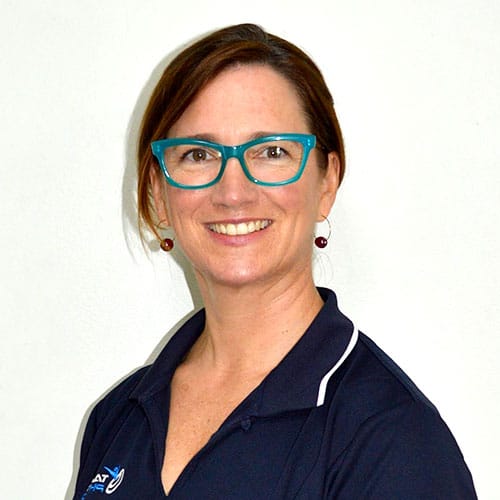 Fiona is the Managing Director and Principal Physiotherapist of Target Physio. She has an ever growing desire to learn and apply the very latest in sports and musculoskeletal physiotherapy to the uniqueness of each individual. Born in South Africa, Fiona spent 4 years working in African tribal hospitals before opening her own Private Practice in Durban. She later fulfilled her dream of working in a world-leading Spinal Injuries Unit in the United Kingdom.

After moving to Australia with her husband in 1996, Fiona secured a sought-after position at the QEII hospital. Working closely with leading Brisbane Specialists at the coal-face of orthopaedic surgery rehab for six years. Fiona has an incredible depth of knowledge of Physiotherapy which she brings to the team at Target Physio.

In 2002, Fiona launched her first Australian Private Practice, which relocated in 2004 and Bellbowrie Physiotherapy was born. Twelve years later, Target Physio emerged from Bellbowrie Physiotherapy, as Fiona expanded her well-respected name by opening a second practice in Kenmore. More recently, Fiona has volunteered as a Physiotherapist across a range of sporting events during the Commonwealth Games, completed multiple Mooloolaba and Noosa triathlons and has completed further Physiotherapy study.

Fiona’s passion for movement and exercise drives herself and her family to be regulars at local swimming pools and along the bike and running paths of Brisbane. A keen crossfitter herself, Fiona is a member of the Main Game at Moggill and is colourful cook and traveler.

Fiona treats patients with the following dysfunctions and injuries: